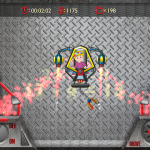 Jet Math Craft for any Apple iOS device (Save eyes – use iPads, please) is recommended to 3 – 10 years old children and everybody who is interested to develop calculation skills as well as study numbers and their pronunciation on different languages. The game allows develop math skills and pronounce math equations on various languages. The game is adapted to preschool children, in order to achieve necessary level of understanding basic mathematical operations. It is also suitable for everybody, who interested to repeat numbers on mother language, and study numbers/equations on new language. Simple and convenient graphic makes study process easy and straightforward. The game settles with control audio streams such as additional effects, melody, mute and number speaker. The game includes various traps, as well as bonuses and rewards. For instance, a limited flight time of the satellite keeps player’s attention and forces him to take a decision in shorter time that improves his memory and concentration. Player can choose individual playing styles and different aircrafts. There are possibilities to change options, sound and visual effects. The aircrafts provide certain bonuses in the game. Additional details about each of them can be found on http://www.lineapps.ru. Free download available for languages, play styles and aircrafts. Number of languages game styles and aircrafts will be increased.

By carefully controlling the aircraft, the player completes math expression, earning points and reaching the awards. There is chance to organize the challenging competition with rivals.

The control is via a virtual joystick in the lower right corner of the screen area. During the game it is possible to control the brick impulse by touching the screen and apply impulse.

The main point of the game is to find the match between data on the field with the numbers. According to the game rules all expressions/equations are on the left side of the screen and the result on the right side. Player should combine expression and earn scores and/or energy.

The aircraft is equipped with a magnet that can be activated by the button placed in bottom-left of the screen.  In order to choose and place the right cube to the right sport the player need to use the magnet and energy. 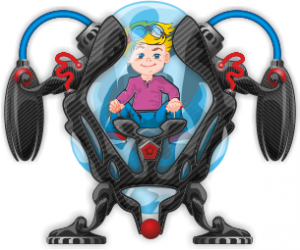 The aircraft has a certain amount of fuel and supply of magnetic force; the resources can be refilled automatically after solving of the problem. Additionally, with a significant collision unit causes some damage, which will decrease total energy and fuel.

For instance, there is a set of integers/numbers: 2, 3, 5, 10, 20, and operations (“+”, “-“, “x”, “/“) on the playing field. The player needs to make an equation. There are several options to solve this problem, and thus, depending on the operand use, it results with different scores. The lowest amount of points will be given for the addition and the maximum for the division operations. Thus, we have a set of dices. We can create the following equations:
2 + 3 = 5, 5 – 3 = 2, 2 x 5 = 10, 2 x 10 = 20, 20/10 = 2, 10/5 = 2. As you can see the calculation is simple and interesting.
Game Centre counts using of each operation separately, that allows challenging other players, or posting your results in social networks, comparing achievements to other users

Levels and types of games:

The game consists of 3 levels and 4 sub-levels at each level.

Each level consists of 4 sub-levels (on the first level – the maximum number of terms will not exceed 20, second – 30 third – 50 fourth – 100 and operands will be changed from “-” substation to “/” division). By increasing of the level set of variants of free options will increase – the higher the level the more cubes on the field.

The full version unlike of free version allows player at any time leave the game, and after returned to the application, continue from the point at which the game was stopped. In the free version, after player stops the game before the end of the current level, he will be force to start level from the beginning.